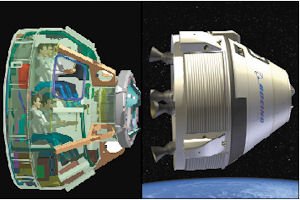 Craft: The Crew Space Transportation-100 will travel to space stations.

Pratt &Whitney Rocketdyne will supply engines for a new spacecraft being developed by the Boeing Co. to take astronauts into low-Earth orbit.

The Crew Space Transportation-100 spacecraft will be the replacement for the Space Shuttle to travel between Earth and the International Space Station and other future stations circling the planet.

The design and building of the launch abort system and the orbital maneuvering and attitude thrusters will take place in Canoga Park, with testing taking place at other sites.

The launch abort system, which separates the service module from the lift vehicle, was tested in February out at Mojave.

For PWR this is not about creating the engines from scratch but instead using proven equipment. The thrusters used for attitude control, for instance, are based on similar thrusters used on Gemini space capsules in the mid-1960s.

Those thrusters had been used on other programs and now come back to their original use for NASA, said John Vilja, vice president of strategy, innovation & growth at PWR.

“When we build these things they will not have any surprises for us,” Vilja said.

Boeing was one of four companies selected by NASA to receive funding in the second phase of the Commercial Crew Development program that will be used for both government and private flights.

In the first phase of the program, Boeing designed, built and tested the structure of the crew module and built an avionics systems facility that could support rapid prototyping and full-scale development.

As the CST-100 craft will carry civilian astronauts there are additional requirements and rules contractors must follow than if the craft was just used by NASA.

The CST-100 project represents a self-investment by Pratt & Whitney, something that the company does cautiously to make sure there is a solid market case.

The market for the RS-68 engine that was developed for the Delta IV, for instance, turned out not to be as large as the company thought. The engine is now planned to be used on the Ares V cargo launch vehicle that has been budgeted by NASA.

Taking astronauts into low-Earth orbit, on the other hand is seen as a good investment and a market not likely to diminish soon, Vilja said.

In addition to the International Space Station, the CST-100 will travel to the Orbital Space Complex proposed by Bigelow Aerospace.

The technology PWR develops for Boeing can be applied to other space vehicles.

The abort launch system differs from those used in other spacecraft in that the orbital propellant is used to jettison the capsule away in case of an emergency. If the launch is successful, that same propellant gets used to maneuver the vehicle once in orbit.

“It gives you less weight and puts the same amount of people in space,” Vilja said.

The other companies getting funding from NASA in the second phase of the Commercial Crew Program are Space Exploration Technologies, founded by entrepreneur billionaire Elon Musk, with $75 million; Blue Origin, in Washington State, with $22 million; and Sierra Nevada Corp. in Colorado with $80 million.

“The next American-flagged vehicle to carry our astronauts into space is going to be a U.S. commercial provider,” said Ed Mango, NASA's Commercial Crew Program manager. “The partnerships NASA is forming with industry will support the development of multiple American systems capable of providing future access to low-Earth orbit.”

A rocket using engines made by Pratt & Whitney Rocketdyne was launched April 15 from Vandenberg Air Force Base.

The rocket was carrying a spacecraft for the U.S. government.

The Atlas V was powered by a booster engine made by RD AMROSS LLC, a joint venture between Pratt & Whitney Rocketdyne and NPO Energomash. The upper stage of the rocket was powered by a PWR RL 10 engine that delivers 22,300 pounds of thrust.

“With nearly a half-century of flight, the RL10 continues to prove itself as the nation’s most reliable upper-stage engine,” said Jim Maus, director, expendable propulsion programs, Pratt & Whitney Rocketdyne. “We’re pleased to see it continue that legacy.”