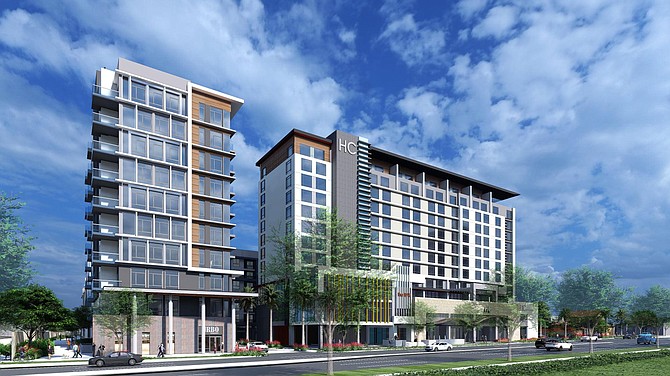 Rendering of Kaplan Cos.’ designs

A rendering has emerged for Kaplan Cos.’ designs to transform the site of the shuttered Fry’s Electronics store in Woodland Hills into a mixed-use complex featuring apartments, a hotel and retail space.

The complex, to be called District at Warner Center, would rise on the 8.8-acre property at 6100 N. Canoga Ave. near Oxnard Street. Images were published in the West Valley News and Urbanize.LA.

Kaplan Cos., which first submitted the redevelopment project with the city of Los Angeles last year, is currently seeking the approval to build 852 apartment units, a 204-key hotel and parking to accommodate some 1,400 vehicles. The entire project would cover 1.1 million square feet.

Designed by the firm AO, District at Warner Center would be comprised of a pair of eight-story apartment buildings and fronted by a 12-story hotel tower along Canoga Avenue. A pedestrian walkway would bisect the property — which includes plazas, outdoor lounges and green spaces — from Canoga to Variel Avenue.

District at Warner Center would be constructed in three phases across four years.

Kaplan acquired the property last year for $42 million. Since Fry’s Electronics went out of business in February, developers have been eyeing the sprawling properties that these stores had occupied. In Burbank, LaTerra Development wants to rebuild the former Fry’s site at 2311 N. Hollywood Way into Burbank Aero Crossings, a project consisting of four buildings that would include 862 apartments, 152,000 square feet of office space, 9,700 square feet for restaurants, and parking for more than 1,600 vehicles.