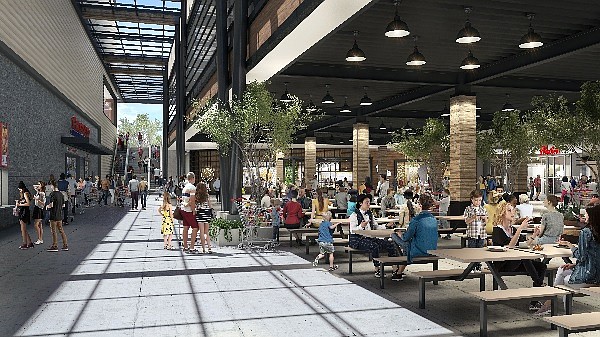 The former Sears location at Westfield Valencia Town Center will become the site of a project dubbed the Patios Connection, building on the success of the retail center’s existing element, The Patios.

Mall owner Unibail-Rodamco-Westfield on Thursday unveiled proposed plans for a $100 million investment in The Patios Connection, a redevelopment of the eastern portion of the property, which includes Santa Clarita’s first luxury cinema, full-service health and fitness center and additional specialty brand shops, plus the addition of Santa Clarita’s second Costco location.

“Unibail-Rodamco-Westfield has seen tremendous success with the addition of Costco to other high-end centers in both California and Maryland,” Chris Kitchen, vice president of development said in a statement. “We recently conducted a survey at The Village at Topanga which showed 55 percent of Costco shoppers also visited at least one other destination within the center on the same trip. Today’s shoppers are looking for everyday conveniences in one location.”

The Patios Connection project will also improve the parking at The Patios by adding a 320-space lot on top of the new Costco space.

Home to approximately 180 businesses, Westfield Valencia Town Center has become the second largest economic generator in the city of Santa Clarita as a provider of more than 1,000 jobs.