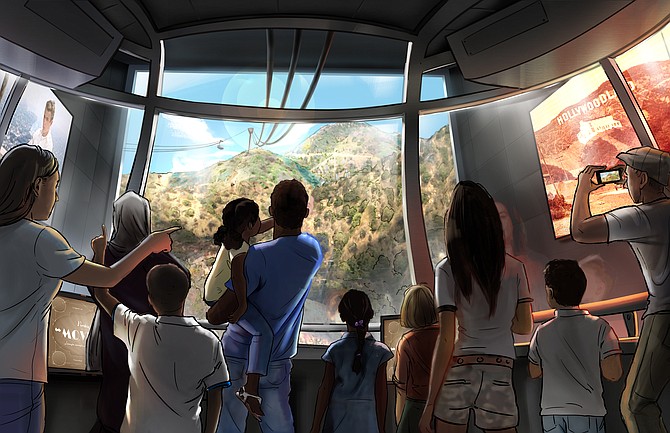 Warner Bros. Entertainment is proposing a $100 million aerial tram to take visitors to the Hollywood sign in Griffith Park.

The Burbank film and television studio would pay for the design, construction, operation and maintenance of the Hollywood Skyway that would start from an area it owns along Forest Lawn Drive, travel up the mountain on the San Fernando Valley side and terminate near the famed Hollywood sign. The experience would include time at an education center on the mountain that would give visitors a history of the sign and the importance of Griffith Park to the local environment.

Public access to the Hollywood sign has become a contentious issue for those living in the Beachwood Canyon area as tourists clog the narrow streets. Last year, a trail to the sign was made off limits to hikers and the city agreed to spend $100,000 to study park access and mobility, including viewing the sign from a distance.

“The Skyway will also create a unique, first-class educational experience,” Warner Bros. said in a statement. “Given our close proximity to the north side of the Hollywood sign, we believe we offer a solution that has the least impact on the environment and the surrounding residential neighborhoods.”

Warner Bros. is in the early stages of the design of the skyway and will conduct meetings with city agencies, neighborhood residents and environmental groups to get feedback for the design process. The company said it would share revenue from the skyway with the city.