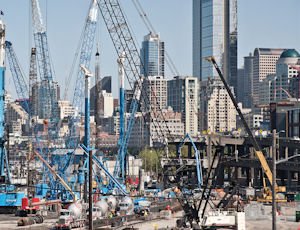 “It’s a $1.4 billion job,” said Jack Frost, CEO of Tutor Perini’s Civil Group, of the tunnel project. “It’s very geologically complex and very high-risk, so it’s a career job for the guys working on this and also for the company.”

Tutor, a public civil and building construction firm with a market value of about $570 million, this month broke ground on the project to build the State Route 99 tunnel through downtown Seattle. The company’s civil segment subsidiary partnered with Dragados USA in October 2010 to form Seattle Tunnel Partners, which submitted the winning bid for the Alaskan Way Viaduct replacement project. The entire replacement project has an estimated total cost of about $3.1 billion.

The Alaskan Way Viaduct and its seawall were damaged when a 6.8-magnitude Nisqually Earthquake struck in February 2001. It was one of the largest earthquakes in Washington state history, and at that time, the viaduct was temporarily closed for emergency repairs and then reopened. For more than a decade, the tunnel’s operation has been the subject of endless criticism concerning the safety of travelers through downtown Seattle. The new tunnel will replace the double-deck viaduct along Seattle’s waterfront and will involve new construction of nearly two miles of new roadway.

Tutor Perini has experience with earthquake recovery and tunneling work, providing the “seismic retrofit” for the Los Angeles Memorial Coliseum and the San Francisco Bay Bridge after quakes damaged those structures. The firm is no stranger to helping a metropolis recover from a disaster, Frost said. It also built the tunnel for Los Angeles’ Metro Red Line, he said.

Washington’s Department of Transportation started taking bids for the project in 2010. Dragados USA, New York, pursued the contract and eventually requested permission for Tutor Perini to enter as a replacement for its first partner “because of its track record building tunnels through dense environments and its ability to serve as a strong equity partner,” said Chris Dixon, project manager for Seattle Tunnel Partners.

Dragados will manage the “driving of the tunnel” because of its experience with large diameter tunnels and boring machines, Dixon said. Tutor Perini will be building the roadway inside as the structure is bored.

“This involves installing all of the concrete lining as well as the mechanical and electrical systems needed for the tunnel to be fully operational,” he said.

The tunnel construction is extremely complex because of Seattle’s environment and proximity to the sea wall, Frost said.

“San Francisco and Seattle are both built right on top of rubble from quakes in the early 1900s and it’s all still there, so that’s been one of the challenges of this project,” Frost said. “There’s ship wreckage, moisture and different soil types, so the ground is always changing and it’s another $100 million at every turn — it’s an immense project.”

Indeed, it’s a historic project for the city of Seattle to complete the SR 99 Tunnel and demolish the earthquake-damaged Alaskan Way Viaduct, “the barrier that has separated downtown Seattle from its beautiful waterfront,” said Kadeena Yerkan, of the Washington DOT’s Alaskan Way Viaduct Replacement Program.

“We knew that its days were numbered,” Yerkan said. “It was 60 years old at the time of the quake. The new tunnel is designed to withstand a 2,500 year event. It took us nearly 10 years to decide that was what we were going to do.”

Washington State Transportation Secretary Paula Hammond said Seattle Tunnel Partners is on the cutting edge of tunneling technology and project management, and the team is now preparing for the arrival of the mammoth boring machine, being built by Hitachi Zosen Corp., in Osaka, Japan. The boring machine has a diameter of 57.5 feet.

“It’s an $80 million machine that incorporates all of the advancements that have been made in tunneling technology in the last 10 to 15 years,” Dixon said. “It’s the only machine in the world like it.”

The tunnel is slated to be complete by 2015, and the existing viaduct will stay in service during construction.

For Tutor Perini, the project plays an important part in its financial future.

As of March 31, 2012, the company’s backlog of uncompleted construction work was $5.9 billion, compared to $6.1 billion of backlog reported at December 31, 2011. The $0.2 billion net decrease is attributable to revenue earned during the quarter, offset by new awards and adjustments to contracts in process which added $0.7 billion.

Additions to new work during the first quarter include a $97 million casino in Louisiana, an $82 million casino in Arizona, $72 million of civil infrastructure projects in the Midwest, and a $49 million mechanical subcontract for the Alaskan Way Viaduct project.

The company has said it believes its financial position and credit arrangements are sufficient to support its current backlog and anticipated new work.