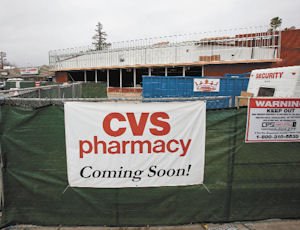 Build: CVS chose North Hollywood because of the high visibility and easy access at the intersection of Vineland/Lankershim.

Things are happening on the fringe of the NoHo Arts District in North Hollywood.

At the southwest corner of the multi-intersection of Camarillo, Vineland and Lankershim boulevards, construction recently started on a new CVS/pharmacy.

The construction on the new store began when the former tenant, Roger Dunn Golf Shops, moved to their new location in the NoHo 14 residential high rise complex last February when their lease expired.

The new CVS will be 14,500 square feet and is expected to open in August. The drugstore chain chose this site because the corner of Lankershim and Camarillo has the attributes the national chain seeks for new store locations: highly visible and easily accessible.

“This is why we generally open stores on the corners of busy intersections said Michael DeAngelis, spokesperson for CVS/pharmacy “The proximity of our other locations is not a factor when population base and traffic patterns are able to support multiple locations in a market. We are also opening new stores this year in Encino and Panorama City.”

California Capital Management, a financial advisory firm for individuals and businesses, moved into the old Animation Guild Building six months ago, a half a block from the intersection and across the street from the new CVS. They refurbished the inside of the building with a modern design, but plan to keep the ambiance of the 1950s and 1960s look outside with only a few changes to the storefront.

“We picked this location because of the long-term redevelopment and it was a value place. We are looking to be more involved in the community in a way that will be reflective of the growth of the neighborhood,” said Gregory Zedlar, CEO of California Capital.

“As the purpose of the area changes from an industrial street with specialty auto shops, we would like to see it become a more family friendly community and the new CVS, which will be open 24 hours, might be the catalyst for that to happen.”

Zedlar believes the NoHo Arts District will grow southward in the next seven to ten years and create a melting pot for more service oriented businesses.

“As the existing buildings begin to be renovated, we hope it will become the “Times Square” of North Hollywood as the architecture of this unique area surrounding the intersection is allowed to grow,” he said.

The Habit Grill will also open at the CVS center and a dry cleaner and laundromat that have been at the center for many years will stay, according to officials of The Lankershim Group, which owns the property. All the storefronts will be renovated to blend with the center’s new theme and look.

Redevelopment of this part of North Hollywood began farther north several years ago when the first phase of the NoHo Commons project broke ground. That project is now in its third phase.

Redevelopment has slowly been moving southward towards Universal Studios and Ventura Boulevard.

Progress has been in fits and starts such as the slow occupancy of the NoHo 14 to the north across from the Chandler subway station.

“Although the high rise is a beautifully designed structure, they have struggled with vacancy because it is hard to pull tenants that far north. Most tenants want to be as close to Riverside Drive as possible,” Agnew said.

He said the area has been “regentrifying” over the last 10 years and the demographic has drastically changed in both residential and commercial aspects.

“CVS is in mid-construction, and a few other rumored national chains are said to have made deals to be located near that intersection,” Agnew said. “We’ve been contacted by several mid-level entertainment related companies (mainly from Burbank) looking for locations in that immediate area.”