Charles weighs in each week with his opinion - his "Comment" - about local business. While he pats the heads of those who make prescient or brave decisions, he's not afraid to kick the shins of businesses that make dunderheaded moves or governments that interfere with free markets. It can be newsy, it can be opinionated, or it can be funny, but the Comment column is always about business in Los Angeles County.

Charles Crumpley has been a reporter, writer or editor for 30 years, mostly with daily newspapers. He was born and raised in Kansas City, MO, and worked for years for the Kansas City Star, mainly as a senior financial writer. He was the editor of the business news section for two daily newspapers, including the New Orleans Times-Picayune. He has won four national journalism awards and studied Japanese banking and business practices in Tokyo as a senior Fulbright scholar. He has been editor of the Los Angeles Business Journal since January 2006.

Give Homeless Money, Not a Unit

It’s outrageous that the average cost to build a city-subsidized apartment for the homeless has climbed to $559,000 with highest per-unit cost now at $746,000.

No More Fines for ‘Open for Business’ Signs

Los Angeles City Council member Bob Blumenfield successfully led an effort Tuesday to end one small but aggravating issue for local retailers during the pandemic: Fines for businesses that put up banners saying they were open.

‘I feel like we are all captive actors in the absurdist play “Waiting for Godot.” We are illogically sitting around, waiting for a vaccine to arrive. But a vaccine may be months away or even longer, and there is no assurance that it will be quickly deployable or even very effective.’

Because of the coronavirus pandemic, two well-known San Fernando Valley fall events – the Arabian and Fernando awards – will not be held in person this year. It is possible the Fernando Award will become a virtual ceremony.

How L.A. Can Help its Businesses

‘Suspend the gross receipts tax until the pandemic has ended.’

The unfolding corruption scandal involving Los Angeles City Hall denizens and real estate developers is absolutely shocking. On the other hand, it’s not at all surprising. It’s almost to be expected.

Carnival Corp., which owns Princess Cruises of Santa Clarita, has reported that it lost $4.4 billion in the second quarter and is speeding up the sale of six ships.

Was That an Error at the Stadium?

‘We may look back on this moment as an opportunity that was lost.’

A new waste-to-energy technology, looking to set up shop at some landfill site in Los Angeles, has gotten a letter of support from Los Angeles County.

Hey, Mayor, We Bent That Curve

‘Our political leaders know about running an economy as much as those guys on “Tiger King” know about Verdi opera.’

A Calabasas lawyer has pleaded guilty to federal charges including bribing agents from the FBI and ICE to provide protection for him and to obtain sensitive information.

Gov. Gavin Newsom on Tuesday outlined a cautious plan to reopen the virtually shuttered California economy in phases in the coming weeks as COVID-19 cases stabilize.

Mission Valley Bancorp on Tuesday announced that its first quarter net income of $816,000, or 25 cents a diluted share, was up more than 16 percent from the same quarter last year.

The economy is darkening rapidly, and on Thursday local experts said they now believe GDP will nosedive more than 20 percent in the second quarter.

Shocking plunges in the stock markets in recent weeks have prompted frantic calls from investors to their wealth managers.

Because of the near seizure of the economy prompted by the coronavirus scare, the second quarter may see GDP shrink by 13 percent.

About 76 percent of small businesses are being hurt by the coronavirus pandemic, according to a survey put out Monday by the National Federation of Independent Business.

At Least 38 Virus Cases in Valley

At least 38 cases of coronavirus have been confirmed in the San Fernando Valley area.

Mission Valley Bancorp on Wednesday reported a down fourth quarter but positive full-year results that set an earnings record.

Give Moms a Break or Suffer Costs

I’ve asked a dozen or so business operators in recent months if they’ve created lactation rooms yet.

LETTER FROM THE PUBLISHER

Discovery Cube Gets Backing from Businesses

You’ve heard that if a National Football Conference team wins the Super Bowl in January, it’ll be a bull market that year? Or that when hemlines rise, so do stock prices? Superstitions like those are pretty stupid.

Is Traffic Helping Our Economy?

Can traffic be helping the Valley economy?

Don’t Bank on This Dreadful Idea

Starting a public bank is a combination of contempt and chutzpah.

State program for firms to provide retirement plans has merit.

State program for firms to provide retirement plans has merit.

Proposed predictive scheduling could be bad for business.

‘Most Influential’ Say: Take a Hike

Maybe now the local business community will get more respect, you think?

But if We Build It, They May Come

Impact of a sports stadium in Warner Center.

Now This Is Just Too Frightful

Boy, I have been wrong about you millennials. All this time, I thought you must be the happiest, most carefree generation in our history.

‘Can’t Be Too Bullish’ on Economy

In case you didn’t see our last issue, the one dated March 4, you missed a true day brightener. If you live or work in the San Fernando Valley, that is.

A Business Group That May Thrive

If you follow the business community, you’ve probably seen a number of single-issue groups form to fight a law or advocate for something.

The San Fernando Valley’s economy is expected to grow 4.1 percent this year – once again outpacing the rest of Los Angeles County, Ventura County and the state.

A Business Isn’t a Babysitter

Are two of our Los Angeles city councilmembers trying to chase businesses out of the city?

Is Amgen a Different Company?

A group of business owners, saying they’re fed up with a particular California law, on Thursday morning took a page from labor organizations’ playbook and staged a public protest. 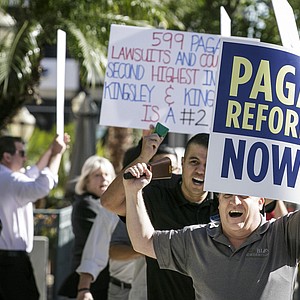 With a sigh, I vote for the state Supreme Court’s decision in April that basically outlawed the gig economy in California.

Valley lost out with Amazon decision.