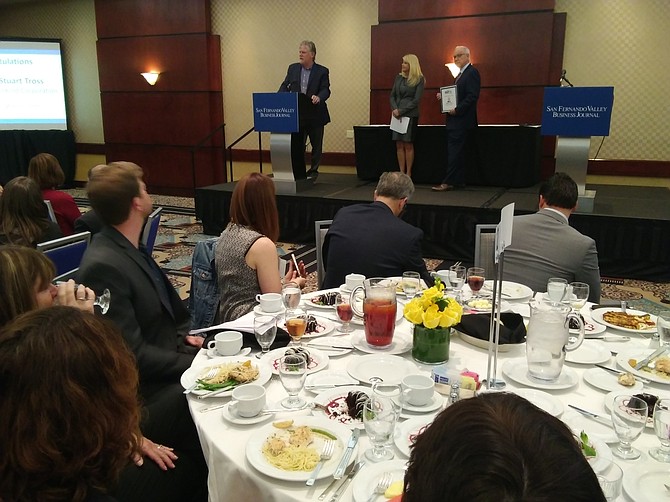 In a program hosted by Business Journal Publisher and Editor Charles Crumpley, some 33 professionals were honored as finalists, with nine picking up first-place awards. CalCPA, California State University - Northridge, the DLC Group, Montage Insurance Solutions and the Century Group co-sponsored the event.

Dina Britten of CPA Principal Dina Britten introduced the first two award categories. John Kneisel of Simulations Plus Inc. won for Small Public Company CFO. Under Kneisel’s watch, the company saw its revenue more than double from $11 million to over $24 million. Doubling as the company’s director of human resources, Kneisel also grew a staff of 30 to 89 employees.

“You maintain your dignity, you do what’s right and you do your job well,” Kneisel told the audience of about 150 people.

CSUN Chief of Staff Jill Smith presented the next two awards. JH Capital Group CFO Glen Corey won in the Large Private Company category and Ann Henzgen of Hydra Electric won for Large Private Company HR Professional of the Year. Henzgen joined the company at a vulnerable time when the company’s past leader had died, and helped reorganize the company into a clean manufacturing facility. She characterized her role as part of “a very challenging and very rewarding profession,” crediting the “many mentors throughout my career.”

Montage Insurance Solutions Chief Executive Danone Simpson present two awards. BlackLine CFO Mark Partin won for Large Public Company CFO; he could not appear in preson because he was in London on business, but a BlackLine representative accepted on his behalf.

HR Professional of the Year went to Mankind Corp. Chief People and Workplace Officer Stuart Tross, who worked with senior leadership to more than double the number of employees at the biotech firm and transition positions from Danbury, Conn. to the new headquarters in Westlake Village.

Tross, a former senior vice president of human resources at Amgen Inc., said that he did not achieve his honor alone, paying tribute to “many talented colleagues across the company, including the 10 people at our table.”

BlackLine Corporate Controller Patrick Villanova, who was also overseas on business, could not accept his Rising Star of the Year award in person. Villanova was credited with leading a multi-national accounting function through the acquisition of Runbook Inc. in 2016, followed by a successful initial public offering of BlackLine last year.