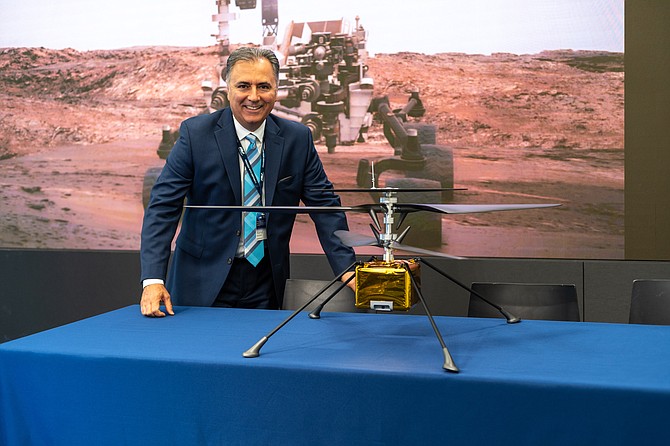 AeroVironment Inc. is developing a helicopter drone that will fly on Mars.

The Monrovia unmanned aircraft company’s contributions to the Mars drone include design and development of the helicopter’s airframe and major subsystems, including its rotor, rotor blades, hub and control mechanism hardware. AeroVironment develops, manufactures and tests its drone aircraft in Simi Valley.

The company is developing the Mars drone in conjunction with the NASA Jet Propulsion Laboratory in La Cañada-Flintridge.

“AeroVironment’s deep, rich and diverse history of innovation combined with our experience with near-space aircraft like Pathfinder and Helios make us uniquely suited to collaborate with NASA and JPL on this historic, interplanetary venture,” Chief Executive Wahid Nawabi said in a statement.

The company also announced that it had closed on Tuesday the sale of its efficient energy systems business to Webasto Charging Systems Inc. for $32 million in cash, which includes a holdback amount of $6.5 million that will be payed upon receiving certain approvals and consents from business customers.

The company sold off its electric vehicle charging station business to focus on the unmanned aircraft business for defense, telecommunications and commercial information markets, Nawabi said.

“We are pioneers and leaders in small unmanned aircraft systems and tactical missile systems for defense markets, and high-altitude pseudo satellites and commercial information solutions for commercial markets,” Nawabi said in a statement. “We are fully focused on generating value for our stockholders through the effective execution of our strategy across these promising opportunities.”