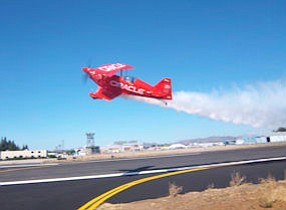 A crowd of more than 100 people turned out Thursday morning for the dedication of the refurbished main runway at Van Nuys Airport.

The $20 million project to repave the runway, extend the shoulders and install new lighting and markings is the most extensive infrastructure project in more than 50 years at the San Fernando Valley airfield. It was completed in the last few days.

The crowd was entertained by an aerobatic flying demonstration by Sean Tucker, and aviation pioneer Clay Lacy landed a 1964 model Lear Jet, which was the first business jet brought to Van Nuys decades ago.

“That honor couldn’t have gone to anyone but Clay Lacy,” said Van Nuys Airport Manager Jess Romo. Lacy has been an airport fixture since the 1950s, and has operated an aircraft charter and maintenance business there since 1968.

Among those in attendance were airport business owners, representatives of the Federal Aviation Administration, airport owner Los Angeles World Airports and HNTB Corp., the Kansas City, Mo. firm that did the engineering and design work. Also attending were federal and city elected officials, and invited community members.

The seven-month project required a 10-day closure in July as work crews laid down a thick asphalt coating on the center section of the runway. Other elements of the project were then completed as the runway remained in service.

How long to close the main runway created tension between airport tenants who own or manage aircraft at the airport once the project was announced in early 2012. The original estimate by LAWA was between two weeks and four weeks, which was unacceptable to the tenants.

The two sides worked out a compromise for the asphalt overlay to be done on a 4,400-foot section of the runway while smaller sections would be completely reconstructed.

“Shutting down a runway is never ideal but we came up with a good balance,” Romo said.

An FAA grant will pay for 95 percent of the repair project.