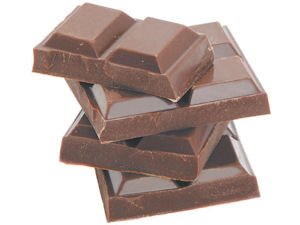 When it comes to chocolate, the “fair trade” label means much more than ethical business practices. Somehow, it also suggests that chocolate is healthy and low in calories.

Such irrational leaps of logic are the product of the “halo effect” and are even more prevalent among socially-conscious consumers, according new research from California State University, Northridge psychology professor Jonathon Schuldt, who studied the effect and published the results in the journal Social and Psychological Personality Science.

Schuldt and his colleagues asked test subjects to read an online one-paragraph description of a fictional brand chocolate. Half were told it was a “fair trade” product. The participants were then asked if the chocolate contained fewer or more calories than other brands. They judged the “fair trade” chocolate as having significantly fewer calories.

In a follow-up study, Schuldt found that people who care about “fair trade” practices were even more likely to believe the chocolate was low in calories.

Schuldt said the research is important as this is the “age of obesity”. False impressions might lead people to make unhealthy food choices, he said.

“The irrational part is that sometimes positive impressions can lead us to judgments and inferences which are not true,” Schuldt said. “Just because something is ethically made does not mean it has fewer calories and we can gorge on it.”

Schuldt admits he is guilty of buying “fair trade” chocolate himself.

“I like to think it’s not because I think it’s low in calories,” he said.