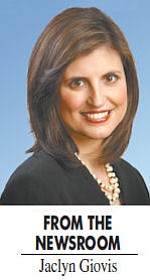 I have a scoop for you in this week’s column. (Boy, would I love to be able to have one in every edition.) So to snatch a phrase from the old silent films, I’m going to cut to the chase.

The Valley Economic Alliance has recommended one of its own to succeed Chairman David Fleming, who at the end of the year will retire from his position on the Executive Committee of the organization’s board of directors.

Secretary and Officer Martha Diaz Aszkenazy was chosen unanimously to lead the Alliance’s board, Fleming said. The Executive Committee cast its vote on Aug. 9, and will recommend Diaz Aszkenazy to the Board of Governors, which has the final approval on the appointment. The Board of Governors is expected to approve the decision at its meeting, which is scheduled for Aug. 24, he said.

Diaz Aszkenazy said she is honored to receive the committee’s recommendation.

Fleming is turning over an organization that is in “tip-top shape,” she said. Selected for the role, Diaz Aszkenazy said she would aim to expand the organization’s reach and get more businesses involved in the Alliance’s efforts.

The Alliance is a private, nonprofit economic development and marketing corporation that works to grow and sustain the economic base of the San Fernando Valley, and to improve the quality of life in our five-city region (Calabasas, Burbank, Glendale, Los Angeles and San Fernando).

The Alliance has played a vital role in shaping the Valley by unifying the voices of these communities. The organization has acted as a regional advocate, pushing local and state government for changes that enhance the landscape for business, promote job growth, and help to build and support a skilled workforce.

Fleming, who has been a major business, community and civic leader for the San Fernando Valley region for more than 40 years, has been a key part of the organization’s success. He has been the Alliance’s chairman since 1996, the year the organization was founded. Many call him the “Godfather of the Valley.” (The list of his achievements and leadership roles could fill this entire column, so I’ll refrain from listing them, so as not to leave out any group.)

Fleming recalls when he accepted the position at the Alliance it had virtually no money, no staff and no office. “I was starting from scratch,” he said.

But with the help of countless business and community leaders, the organization grew into what it is today, he said.

The Alliance, based in Sherman Oaks, now has an annual operating budget of about $1.1 million, all of which comes from investor donations, special projects and events, or foundation grants. It also has a professional staff of seven, headed by President and CEO Ron L. Wood. The group and its strategic partners have supported the creation of tens of thousands of jobs and its members represent well over 1,000 area businesses.

Fleming announced his plans to retire at the Alliance’s annual gala, which was held at the Valley Performing Arts Center at California State University, Northridge on July 23. After 16 years in the role, it was time to pass the torch.

The group’s Executive Committee had 10-15 business leaders on its list of potential successors, Fleming said. The committee sought a chair who was an established member of the business community and who was willing and able to volunteer countless hours to the job.

“She’s very sharp, very intuitive and she has a great reputation,” Fleming said. “Her words are her bond, and that’s AAA rated.”

Diaz Aszkenazy has been the Alliance’s secretary for about five years, and has been involved with the organization for a least a decade.