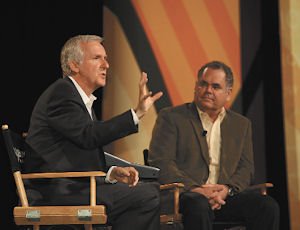 Having made breakthroughs in the 3D format for feature films, director James Cameron and camera inventor Vince Pace now want to do the same thing for broadcast television.

Pace and Cameron, who collaborated on the Fusion camera system used on the blockbuster “Avatar,” have formed a new company to replace Pace’s Burbank-based camera systems development company.

The Cameron-Pace Group will be located in Burbank in the same buildings where Pace has operated for more than 10 years. Their combined presence further solidifies the San Fernando Valley, particularly Burbank, as the center for development of 3D technology.

Releasing a 3D version of a film is now standard practice by the major studios but the home market will likely bring in the most revenues for 3D content albeit not in the immediate future.

The approach the pair is taking with broadcast is similar to the one taken with feature films.

When the first film using the Fusion was released in 2001, there were only 50 screens capable of showing 3D films. That number is now more than 20,000 screens worldwide.

The thinking then was that if there were a model to create good content then the means of showing the films would follow, Pace said.

That strategy is now being applied to the broadcast market.

All the major television manufacturers are making some models of 3D compatible sets, and in the next year or two all flat screens will likely be 3D ready. In addition, both ESPN and Discovery are readying all 3D channels.

By getting ahead of the curve now with developing cameras rigs and post-production and transmission technologies, the Cameron-Pace Group positions itself to serve the content creators.

“We see this transitioning over years and not months,” said Jim Chabin, president of the International 3D Society, based in Century City. “Vince and Jim and others at the front end are going to be very busy.”

CPG builds on the base established by Pace’s camera company, which got its start creating equipment used for underwater filming. The new company will develop the next generation of camera systems, services and creative tools. Expansion plans include doubling or even tripling the current staff of 60 employees to service the thousands of rigs television production will require.

Rather than just be a company serving a single piece of the production process, Cameron-Pace looks at the overall picture of transitioning 2D entertainment into good 3D entertainment.

“There are lots of people out there making the jigsaw puzzle pieces but nobody knows the picture we are trying to create,” Pace said. “CPG works on that picture then breaks it down on a component level.”

This new venture is not just a way to work with directors, cinematographers and broadcast networks but to create a brand that the viewing public, inundated with 3D offerings, will equate with quality.

Both Pace and Cameron are co-chairmen of the company, with Pace as the chief executive handling daily operations.

Cameron, whose directing credits include “Aliens,” “The Abyss,” and “Titanic,” the highest grossing film of all time up until “Avatar” surpassed it in 2009, brings a star power that opens doors. Cameron is among the most vocal supporters in Hollywood of the 3D format, with another being DreamWorks Animation SKG Inc. CEO Jeffrey Katzenberg.

What became the Fusion camera system had its origins in a conversation the two men had during a dive trip in 1999. Cameron expressed an interest in a camera that shot in 2D but could also capture a 3D image. The first tests on a prototype camera were done the following year.

That working relationship moving to the next tier can be expected because Cameron has someone he can communicate with about the direction of 3D technology.

“They know what is holding 3D back is bigger and better and more efficient tools for the films,” said Marty Shindler, an entertainment technology consultant.

The next step with that equipment is improving the resolution of the images and capturing it right the first time. That is especially important when it comes to broadcast because showing a live sporting event in 3D does not allow for a second chance.

Post-“Avatar” the entertainment industry has gone off track a bit with the type of 3D product in the market. Camera went from massive 400 pound rigs to the 27 pound ones used on “Avatar.” Now the weight has started to increase again, limiting their mobility.

It is now time to pull in the reins and get back on track, Pace said.

“I am happy with the technology supporting the format,” Pace added. “Now it is about channeling it so that it is adding a value to the entertainment.”